9 Weird & Wonderful Bedroom Superstitions From Around The World

It may or may not surprise you, but many of the things we do today without a second thought are deeply rooted in folklore – what you might consider “old wives’ tales”

These superstitions often play into the deeply religious and spiritual beliefs of the era and country they originate from. It seems the bedroom, sleep and night time in general are no exception either…

As a child, with the bedroom blinds closed and the room draped in darkness, you’d often find that the rabid fear of monsters creeping out from under the bed quickly took hold. Or maybe you’re one of those who suggests someone should “sleep tight” as they head off to bed? And of course not forgetting those days where you’re in a terrible mood, so you just write it off as getting out of the wrong side of the bed.

But where do these bedroom related superstitions come from? And why do we still hold on to them now?

We couldn’t stop contemplating these questions so we decided to take a look at different bedroom superstitions around the world, and it was pretty eye opening (pun intended) to see what other cultures follow. To share what we found, we illustrated what we think are 9 of the most fascinating, do check them out below. How many have you heard of? Do you follow any of them?

Don’t Leave Indentations in Your Bed 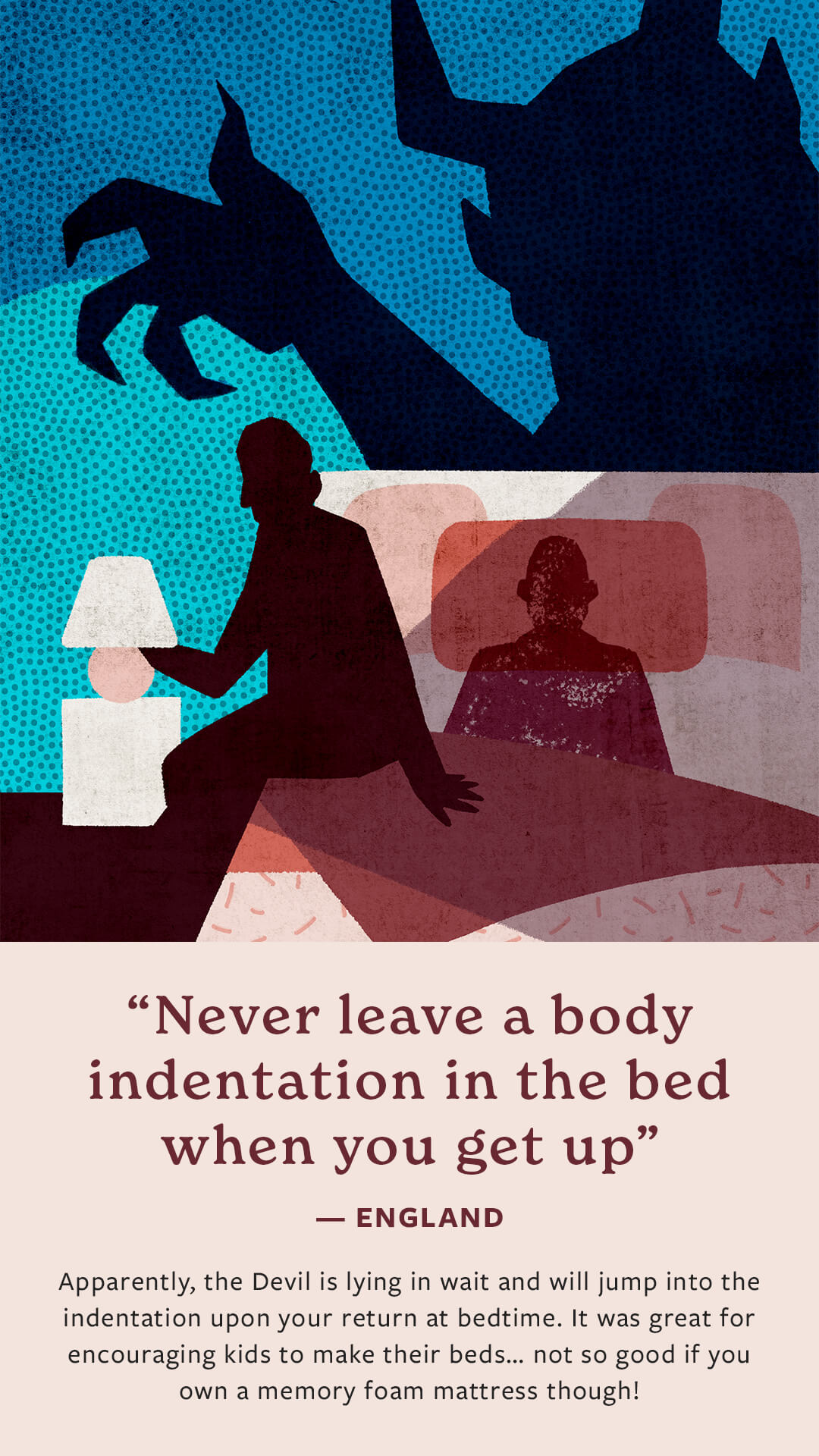 For centuries, mattresses were stuffed with straw and feathers to make them more comfortable, unlike the pocket springs and foam toppings we’re used to today. The downside to this was that after a night’s rest, you’d often be left with an indentation where you lay that wouldn’t “bounce back”. It was said that if you didn’t reshape your mattress each morning, you’d be creating the perfect hiding spot for the devil to lie in wait for you.

Whilst the origin of this one is a little hazy, it’s definitely something that’s known in the UK and has been used for generations as a way to encourage children to make their beds. We’re not sure if this is such a good idea though – children can be difficult to get to bed at the best of times and we can’t imagine this makes them any more eager!

Never Leave a Hat on the Bed 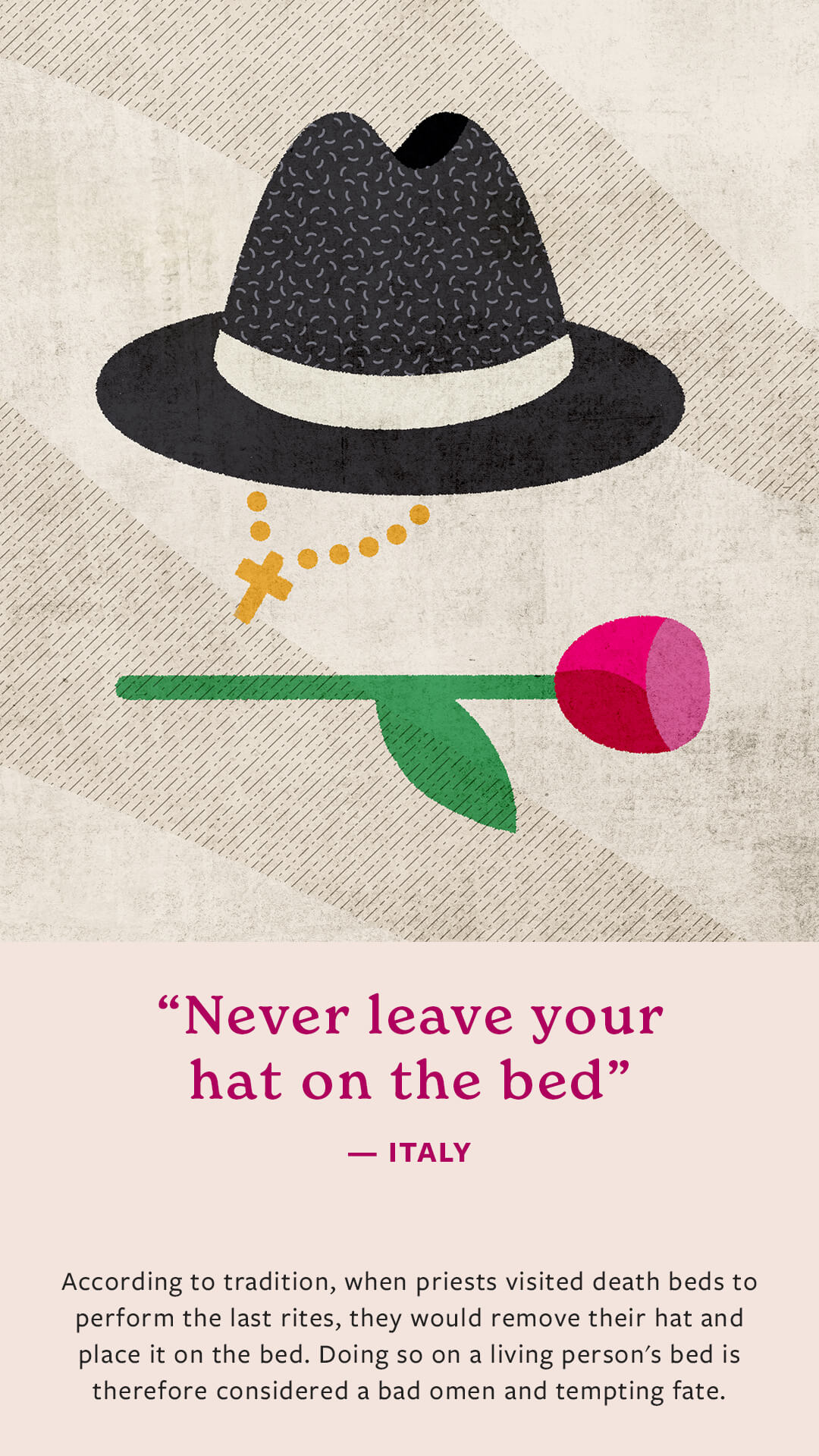 In the Catholic religion, it’s customary for a priest to visit a person that’s on their “death bed”. As a mark of respect, the priest would remove their hat and place it on the dying person’s bed as they were reading their last rites. It’s said that if you lay a hat on the bed of a healthy person it’s considered a bad omen and can tempt fate.

Another theory, and one that possibly has more of a scientific explanation, was that evil spirits lived in your hair. But what’s more likely is that these evil spirits were actually headlice, which were much more prevalent in earlier times. These headlice would then be passed on to a new “host” via the removal and placement of the hat. Ew.

Never Sleep With Your Head to the North 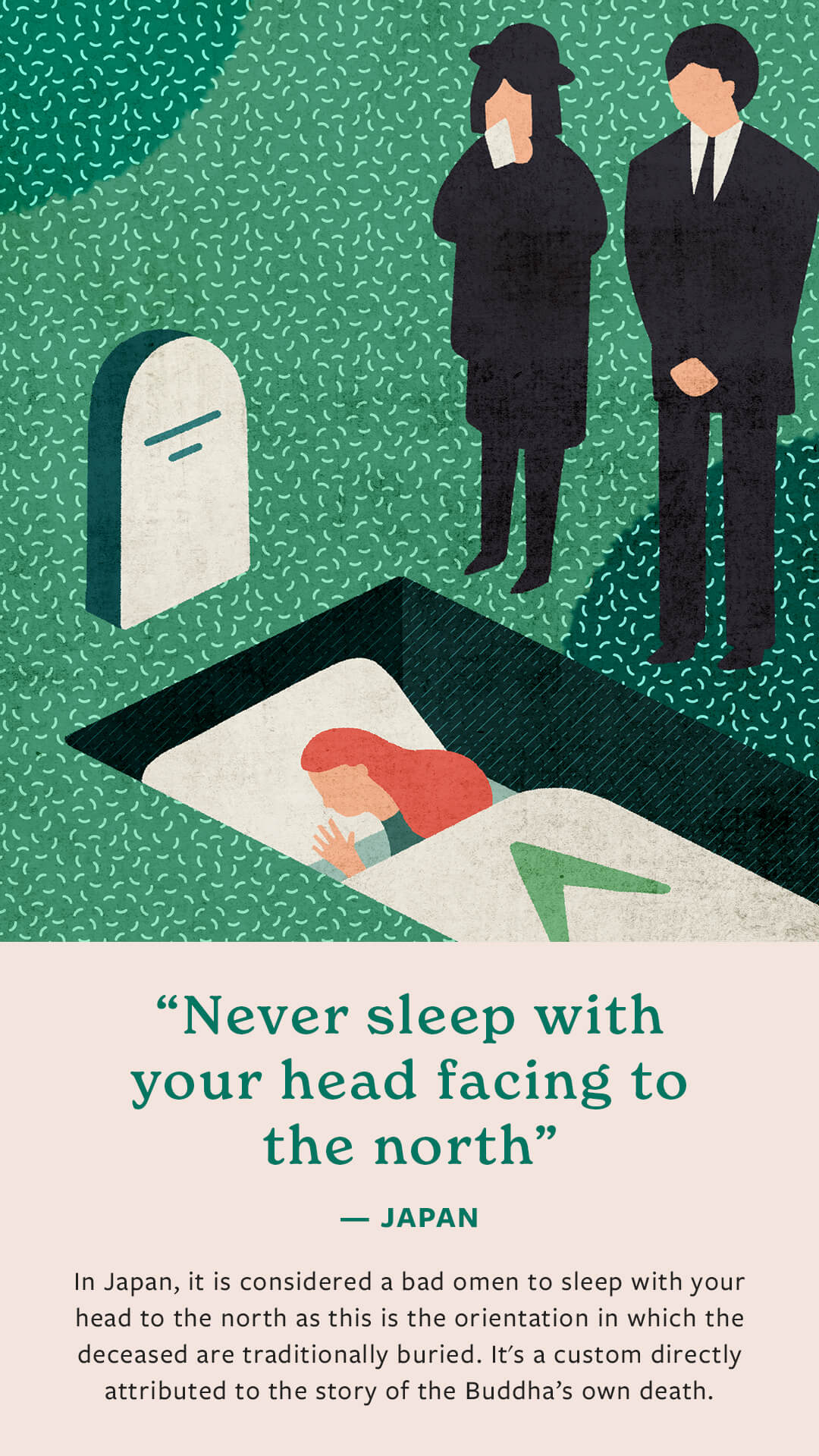 Though this superstition is believed to be rooted in Japanese culture, it’s travelled overseas with many other Asian countries believing it. As well as westerners who follow the Buddhist religion.

In Japan, it’s considered a bad omen to sleep with your head to the north as this is the direction in which the dead are traditionally buried as a mark of religious respect. It’s also often referred to as “north pillow” and directly relates to the story of Buddha’s own death.

Other theories rooted in Eastern tradition draw from the idea that there may be physical implications when sleeping with your head to the north. This is due to the Earth’s rotation and its electromagnetic field, and how it aligns with our own magnetic energy.

If You Hear an Owl at Night, Terrible News is Coming

Since ancient times, owls have been associated with death and mourning in Egyptian culture. They were heavily depicted in art and religious texts, and were one of only a few animals that were drawn “face on” due to their forward-facing gaze. The literal translation of the ancient name for the bird is “the one who laments” and is said to denote very unpleasant and dreadful evocations, this is likely because of their very stealthy, uneasy presence when stalking prey.

The fact the owl would choose to make a noise, suggested that it was giving a warning and you should prepare for something terrible to happen, most likely the death of someone. 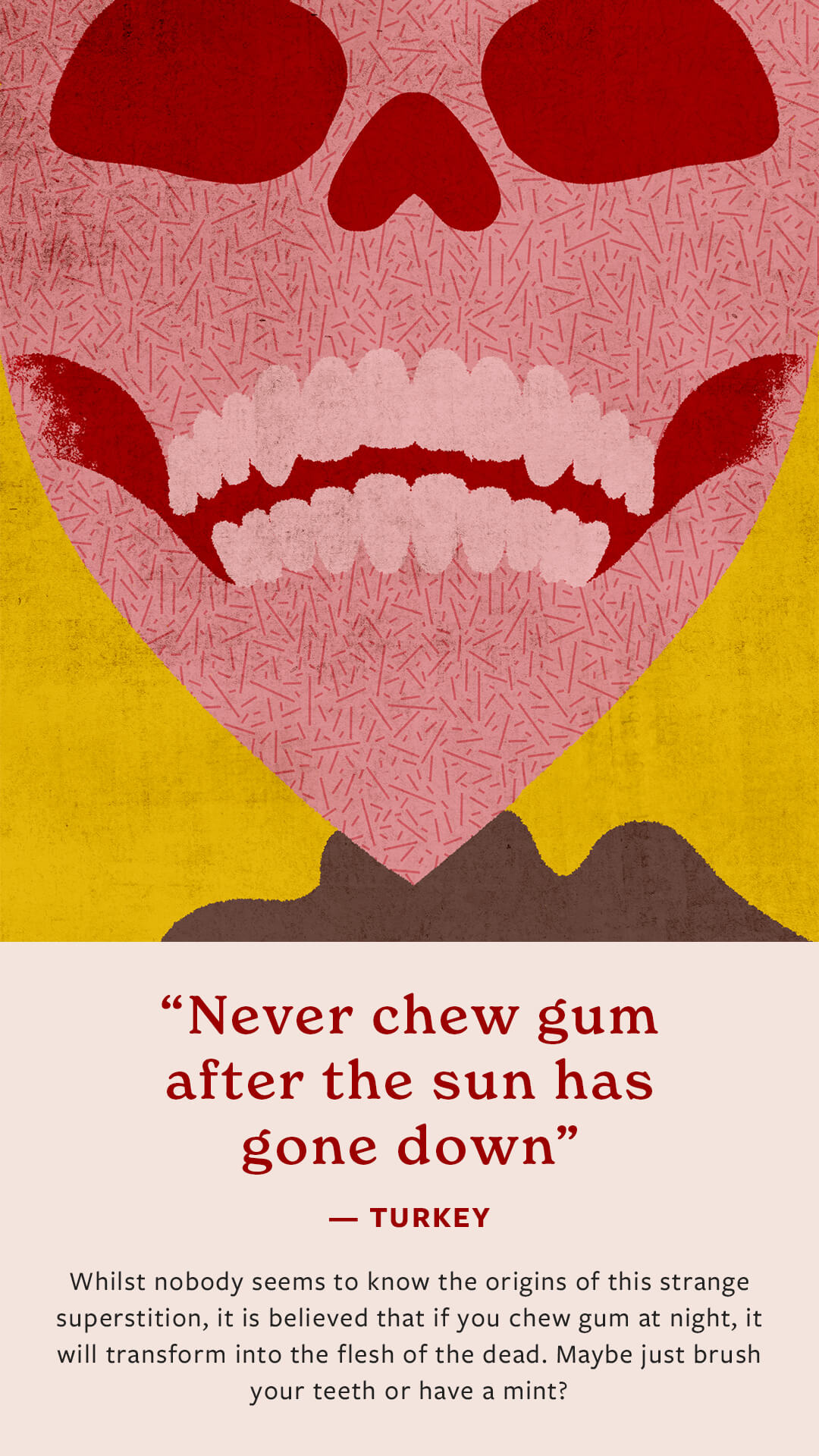 OK, so whilst this one isn’t strictly bedroom related and we’re not entirely sure where this superstition came from, we thought it worth a mention as it seems to be one that the people of Turkey hold on to. It’s probably one of the grossest on our list as well.

It’s said that if you decide to chew gum at night it will turn into human flesh. Why? No one seems to really know. What we do know is, don’t chew gum whilst lying in bed… for health and safety reasons if anything.

Never Leave Your Bedroom Window Open on All Saints’ Day 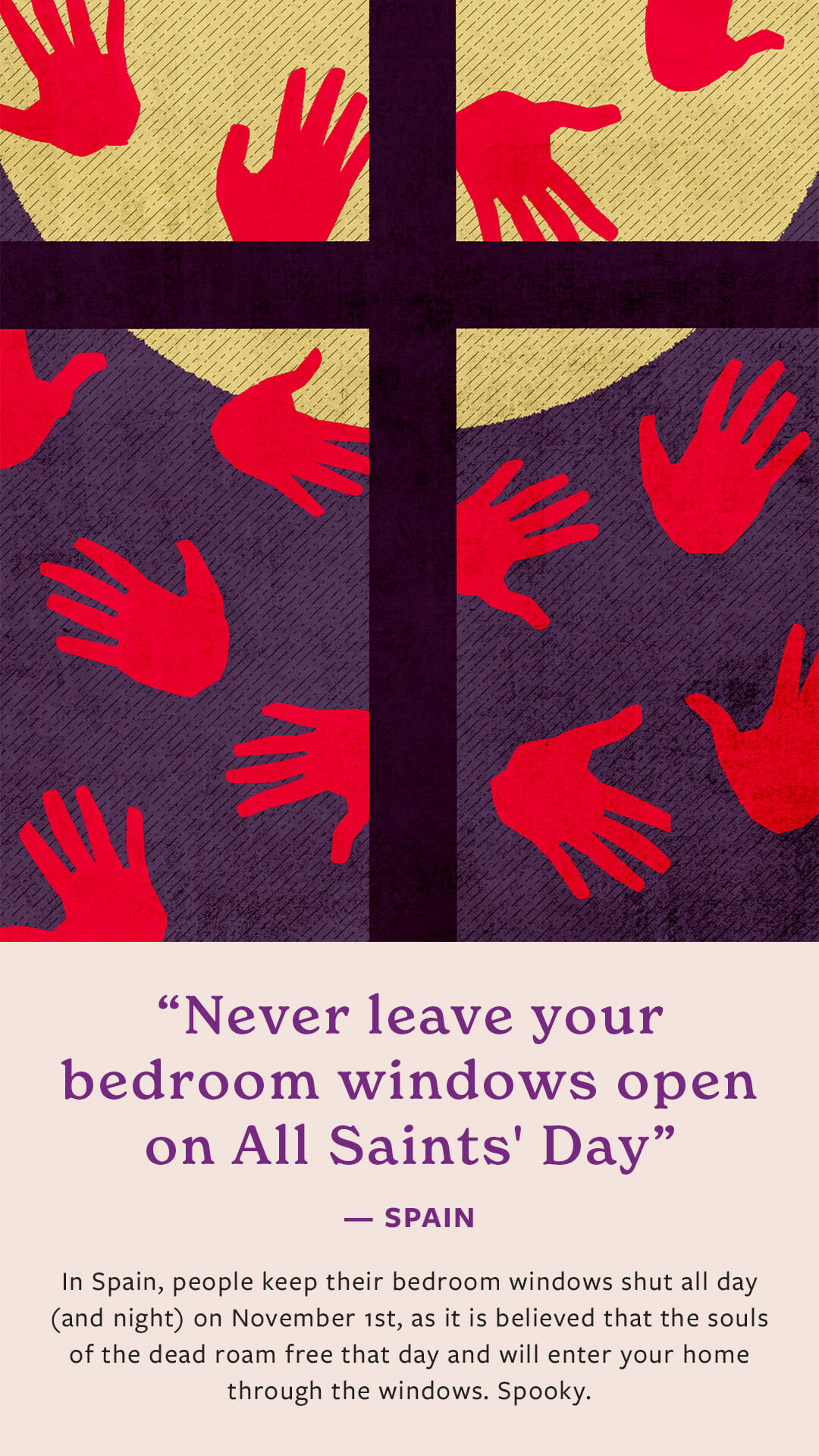 November 1st is All Saints’ Day (El Día de Todos los Santos) in Spain and is taken quite seriously – it’s even a public holiday these days. Much like the origins of Halloween, it is believed that the souls of the dead roam freely on this day and should be honoured with gifts and remembrance.

Though many Spaniard’s will simply use it as an opportunity to visit loved ones in the cemetery, there are certain regions where many superstitions dictate what you do on All Saints’ Day. One superstition is to keep your bedroom window shut tight all day and night to prevent the roaming souls taking up residence in your home.

Always Sleep With an Axe Under Your Bed 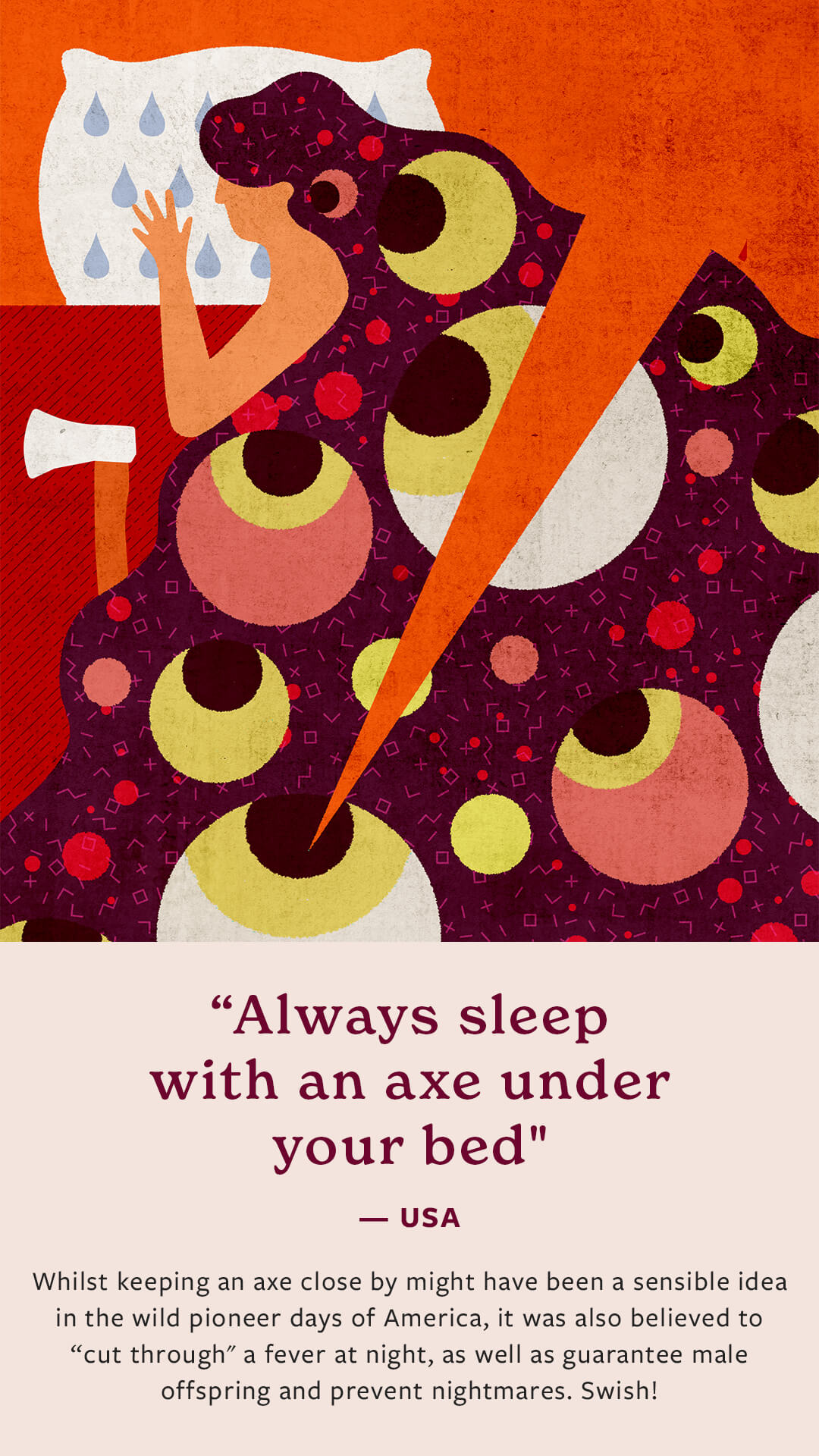 Rooted in American folklore, this one probably harks back to the pioneer days and times of colonisation. With some seriously dangerous animals out in the American wilderness, having something close at hand to protect yourself as you sleep was probably key for your own survival.

On a more superstitious level, it was said to be the bringer of good luck and lead to sweeter dreams – likely because you were able to settle more easily knowing you were somewhat protected. It was also said that it would “cut through” a fever and even lead to male offspring – likely because of the more masculine connotations of an axe. 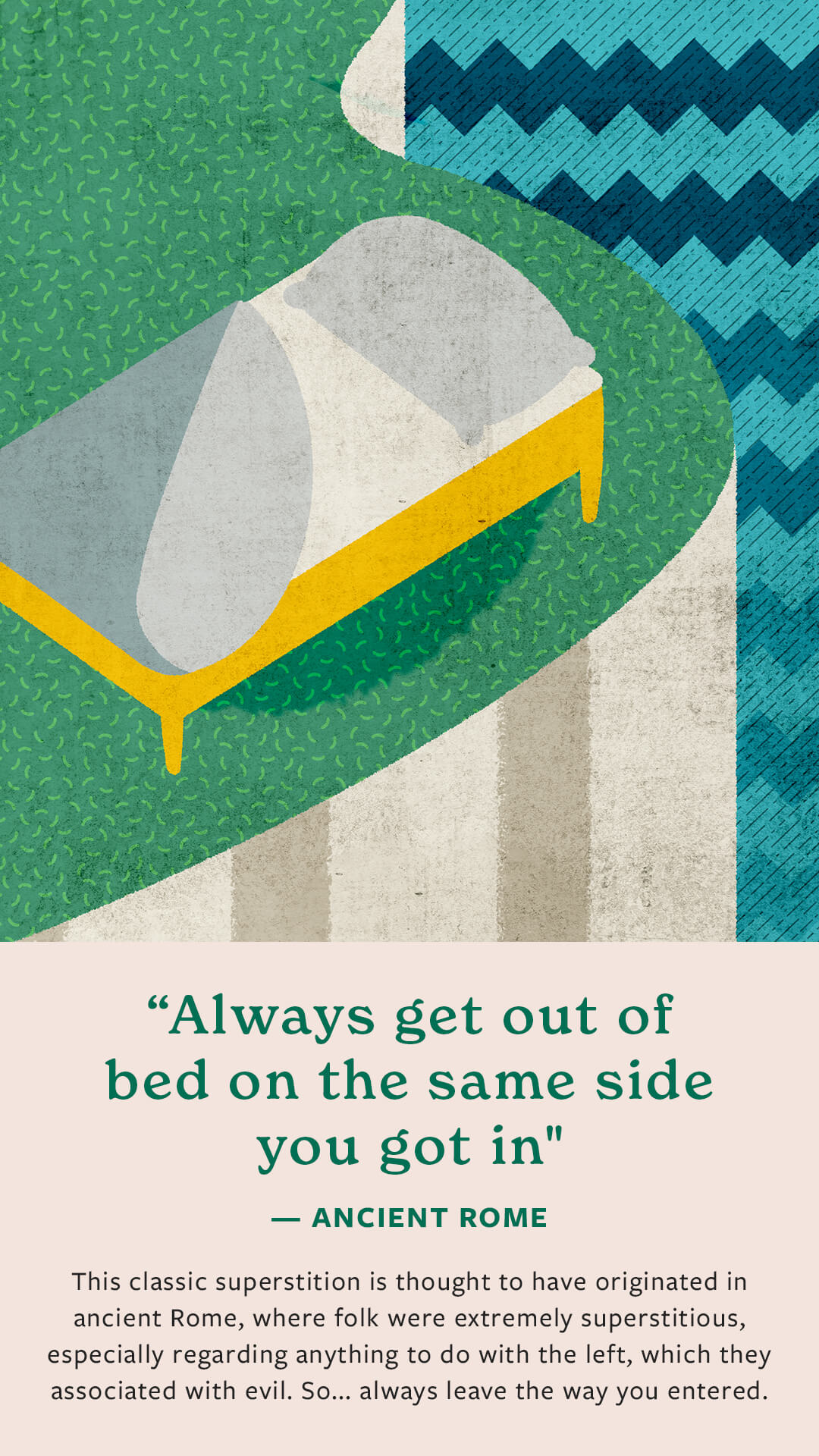 This is a pretty classic superstition that many still believe in today. It’s said to have originated in ancient Rome, when anything related to the left was feared and associated with evil. If you were to get out of bed on a different side to the one you got in (particularly on the left side), you were likely to have a terrible day and bad luck would follow you.

Likewise, if you stepped out of bed with your left leg first, you’d be in for some big karmic trouble. The only way to overcome this bad juju was by putting your right sock and shoe on first.

Interesting fact… the word “sinister” even comes from the Latin word for left.

Never Sleep on the Ground 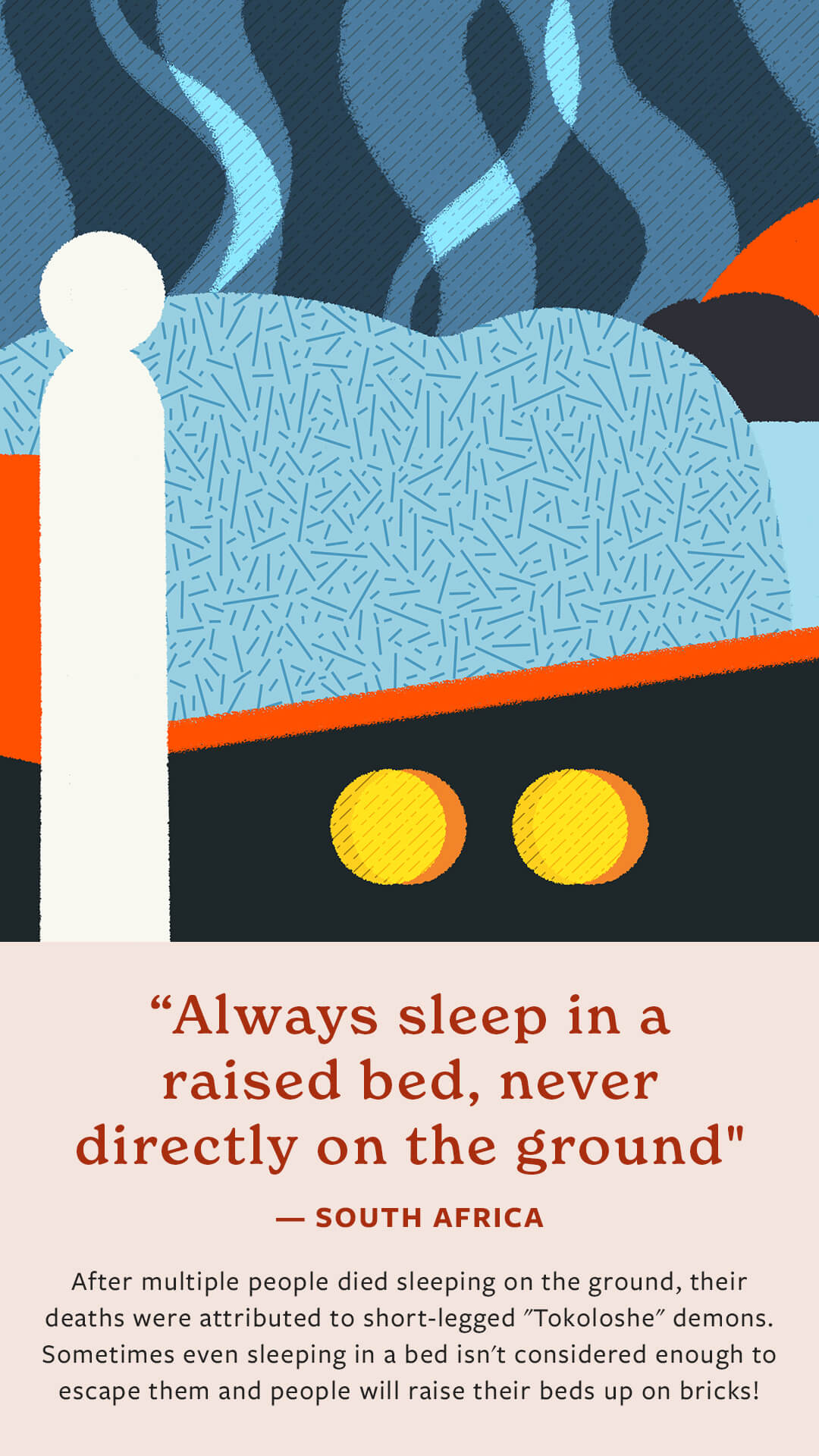 This belief originated when a number of people died after sleeping on the ground in southern Africa. The theory of the creepy Tokoloshe creature came from Bantu folklore after the deaths couldn’t be explained (though sleeping on grass mats on the floor seemed to be a common factor).

Belief in the Tokoloshe still remains today across a number of southern African tribes and is said to have been created by a witch doctor to harm his enemies. The Tokoloshe is a small hairy beast that will bite off people’s toes, so keeping your feet off the ground in a raised bed is a must. Some would even take extra precautions by standing their bed on bricks to raise it even higher.

A more plausible explanation for the number of deaths is that many people would sleep next to campfires in their rondavels to keep warm – lowering oxygen levels and releasing poisonous carbon monoxide gas.

We hope you’ve enjoyed reading about some of the bedroom superstitions that are still held around the world! If you’d like to share our illustrations as part of your own content, all we ask is that you link back to this post and cite Unbeatable Blinds as the original source.

Ready to jazz up your own bedroom with new window dressings to help keep those dodgy demons at bay? With real wood Venetian blinds from just £14.79, as well as faux wooden blinds and an extensive range of roller blinds for bedrooms, plus the ever popular day and night blinds, you’ll be spoilt for choice!

For all enquiries please contact us at:
customersupport@unbeatableblinds.co.uk
or alternatively call 0333 321 4050